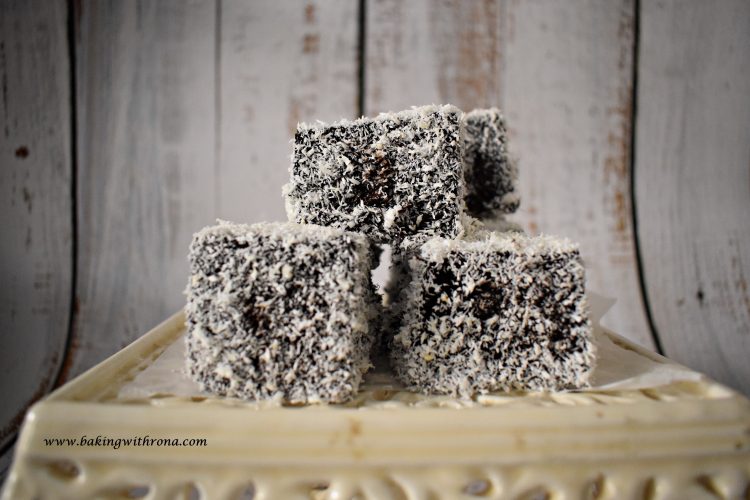 It never occurred to me how addictive Lamingtons can be until I had my first one. Having read about them in many of my baking books, I got down to actually making them for the first time only earlier this month. They are good, they are really good.

Lamingtons as fancy as they sound are actually pretty simple to make. If put in simple terms, they are squares of sponge cake, covered in chocolate sauce and then rolled in desiccated coconut.

Does this sound like a familiar combination? When I had the first bit I instantly knew it tasted really familiar but it was only a day later that I realised that it tasted a lot like the chocolate Bounty. Conclusion: If you like eating bounty, you will love eating lamingtons.

The most important part of the lamingtons is probably the sponge. The chocolate sauce is pretty simple to make and the desiccated coconut is used as-is. So effectively there are only two parts to making these beauties.

You need a good sponge that will soak in the chocolate sauce well and at the same time one that won’t get soggy or break when you dip it in the sauce. This sponge uses more than a regular number of eggs than most recipes with 6 whole eggs, but they make all the difference.

Difficulty wise? This is a very simple recipe for Lamingtons. The only effort you need to make is beating the eggs and sugar until the mixture turns pale and thick. This requires at least 6 -8 minutes and I’d say almost mandatory to use an electric cake beater. You could try using a whisk if you don’t have a beater, and I’m guessing that’s going to be a lot of time and work.

There are variations to making Lamingtons, I’ve tried what is probably the simplest kind. A popular variation would be to sandwich the cake with some raspberry jam before covering it in sauce and coconut. If you do try it this way. I’d love to hear about it.

If you like baking with coconut, you might enjoy baking this coconut cake from my old blog. Also, anyone try the apple cake I posted earlier? When you do try any of the recipes posted here, send me pictures or post them on Instagram, tagging me. See you there.